Berlin/Brussels, July 5th 2021 – Mr. Emir Djikic, Director of the CEFTA Secretariat presented and elaborated key deliverables that the CEFTA Parties achieved in the light of the joint decision to develop Common Regional Market, agreed in November last year in Sofia. 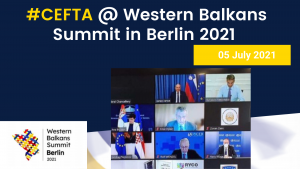 “CEFTA is working effortlessly with our partners to bring idea of Common Regional Market live and implement key activities from the Action plan for Common Regional Market, as fast as possible for the benefits of our citizens and businesses. When we summarized results from 2020, year that brought many challenges, we were in position to say that CEFTA made trade easier in challenging times, and also to promise that this will remain our priority in 2021. We work on the various processes, that would bring time and costs savings for the businesses, to mention some of them – extension of the Green Lanes within CEFTA and with the EU, facilitation of the e-commerce, validation of the AEOS programmes. Team in the CEFTA Secretariat, colleagues from the administrations, our partners, we were all committed to this and I can proudly elaborate and present rather good results for the first half of 2021.” said Mr Emir Djikic.

CEFTA Green Lanes have been extended to all road BCPs/CCPs in the region and are being extended to rail BCPs/CCPs too. The Green Lanes will be extended with Greece, as announced by the Prime Minister Kyriakos Mitsotakis at the Berlin Summit. It will serve as a pilot for connecting with the EU MS. The possibility to apply the same concept with Italy will be further examined. To remind, the Green Corridors/Lanes have been established at the dawn of the COVID-19 outbreak to prevent shortages of essential goods and medical supplies and to mitigate disruptions in transport and trade of goods caused by various precautionary measures taken for containing COVID-19 outbreak. Therefore, the CEFTA Secretariat and the Permanent Secretariat of the Transport Community jointly prepared the proposal to facilitate the transport and trade of goods of first necessity within the Western Balkan and the initiative was implemented in less than a month. The statistics show that approximately 80% of trucks are using intra CEFTA green corridors, with 20% of those using green lanes carrying goods of first necessity and benefiting from priority passage. In 2020, since the start of the pandemic, 500,000 trucks have benefited from this initiative and no major jams were reported since. Given the success of this initiative the Parties agreed to extend it to all BCP/CCPs within WB6 and it is operational since May.
In light of the economic importance of the European Union for the region, accounting for around 2/3 of all trade, CEFTA Parties have expressed strong interest to extend the Green Corridors/Lanes to the BCPs with neighbouring EU Member States based on the conclusions of Sofia Summit held in November last year. This initiative will benefit both the EU and the CEFTA Parties by reducing the congestion of trucks at crossing points as the average waiting times on some CEFTA/EU BCPs exceeds 2 hours.

Validation mission reports on AEOS for North Macedonia, Serbia and Moldova are finalized, and ready to be adopted. The remaining Parties are encouraged to apply for the validation process. To remind, through recognition customs administrations involved agree to recognise the validated AEOS programmes issued in one market in the other six markets. The status provides easier customs clearance procedures in general and is key elements in strengthening end to end security of supply chains, providing multiple benefits for trade. Mutual recognition of AEOs programmes for security and safety in CEFTA would enable the companies holders of the status to benefit from it in all CEFTA Parties.

Decision on facilitation of electronic commerce setting the rules on e-commerce in CEFTA was finalized. Adoption of common market principle and harmonisation of key rules we provide to the businesses one set of rules for 7 markets. This means: no special authorisation and registration for digital businesses, less costs related to regulatory analysis, compliance, enforcement and courts.

Expert discussions on professional Qualifications have been finalized, while significant progress has been made in negotiation on Dispute Settlement and removal of work permits and tourism services.

Decision on the disciplines establishing a general system for the mutual recognition of professional qualifications has been finalised on the expert level. Significant progress was made in negotiation the Additional Protocol 7 on Dispute Settlement and Decision on the removal of the requirement of work permits for professional activities under the Additional Protocol 6.