A successful end to 2019 for CEFTA 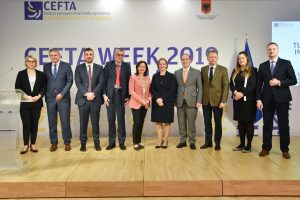 “Turning challenges into opportunities” was the title of the one day Conference which rounded off the CEFTA WEEK in Tirana on December the 18th 2019. And indeed, it was an appropriate title for the conference which brought to an end a year which might have “started with a whisper”, but did end with an exemplary “bang”. Three very important documents which further facilitate trade in goods and  services among the CEFTA Parties were adopted and a fresh round of funding for the valuable work of CEFTA Secretariat and the Western Balkans 6 Chamber Investment Forum (WB6 CIF) was secured thanks to the European Commission and the German Agency for International Cooperation, Deutsche Gesellschaft für Internationale Zusammenarbeit (GIZ) GmbH (read more about the grant in our next news item). 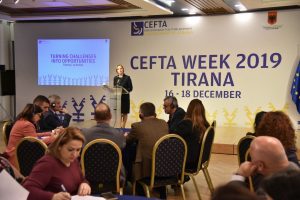 Opening the conference, Ms Anila Denaj, the Albanian Minister of Finance and Economy said that “CEFTA has been and remains a forum where discussion and negotiation between the Parties must bring progress and find concrete solutions for all via effective regional cooperation.”

Speaking for the European Commission, Ms. Genoveva Ruiz Calavera, the Director for Western Balkans emphasised the role of regional cooperation: “It is and will remain a key factor for the European path of this region… The work that you all are doing here in fostering trade facilitation in the context of the ambition to create a regional economic area is really essential, because it helps the region to make the most of its economic potential”.

The Director of CEFTA Secretariat, Emir Djikic, thanked the European Commission for providing valuable support to CEFTA in advancing both the regional integration agenda and the gradual convergence of the CEFTA Parties to the EU agenda. 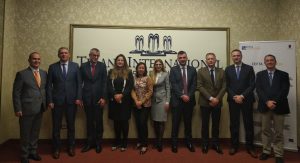 The CEFTA Joint Committee meeting which followed, agreed to adopt most of the documents which have been prepared at a technical level over the past months. Among those adopted are the Additional Protocol 6 on Trade in Services, meant to open up all the seven markets for trade in services and gives companies who trade in services a sense of predictability and transparency when operating in other markets. It will create possibilities for further economic integration among the CEFTA Parties, enable mutual recognition of specific licences, professional qualifications and ease of e-commerce. Specifically, it should mean that once a licence is obtained in one of the Parties, it will be valid in all seven. This particular protocol will also create a legal basis for future mutual recognition of professional qualifications for all regulated professions (requiring education certificates). Basically, once this is implemented, there should be no barrier for an engineer from, say, Prilep in North Macedonia to get a job in Mostar in Bosnia and Herzegovina without any hindrance. That a doctor from Chishinau in Moldova, can find employment in Tirana, Albania.

Also adopted was the Decision on establishing the validation procedure for the mutual recognition of CEFTA Parties’ national Authorised Economic Operators’ Programmes with regard to the safety and security (AEOS). Behind this complex title hides the possibility for much easier customs procedures between the CEFTA Parties. In short, authorised economic operators, in other words – companies and organisations who have been certified for customs clearance will in the future be recognised by all CEFTA Parties if recognised by one. So once the customs documentation has been prepared by one operator, it will not have to undergo the same procedures at every single customs point within the CEFTA Parties. This will not only make border procedures easier, but also help build up the trust between the Parties that every one of them is following and respecting the same procedures.

The four panel discussions, titled “Regional Economic Integration Today and Tomorrow”, “Boosting regional trade: Progress and next steps”, “Liberalisation of Trade in Services – A New Framework” and “CEFTA 2020: “A shared vision towards the future” looked in more detail into the possibilities for implementing the adopted agreements but also into the future activities of CEFTA.

Rounding off the discussions, Ms Belinda Ikonomi, Deputy Minister of Finance and Economy of the host country and outgoing Chair-in-Office, Albania, emphasised that via CEFTA, the whole region becomes stronger and more competitive and thereby advances on its EU path.

Ms. Adela Gjorgjioska, from North Macedonia’s Berlin Process Coordination Team, said that the Berlin process could be used as a platform to advance existing regional initiatives, projects and activities such as CEFTA.

Speaking from the position of a donor, Ms Tanja Boskovic from GIZ expressed her satisfaction with the results that CEFTA is achieving, adding that “Our vision is actually to support the vision of our partners and we are really happy to hear and see that their vision is clear, ambitious and really bright”.

👉 Intellectual property rights are a critical aspect of business and innovation in today's economy.
The goal of establishing an IPR framework in ...#CEFTA is to create a supportive environment for businesses to innovate and protect their creative works.